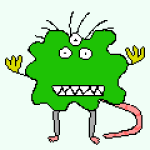 While investigating ancient volcanoes in the Valles Marineris region of Mars, the largest canyon in the Solar System. Nasa appears to have stumbled upon something that looks a lot like ancient ruins been buried by mud, possibly during the great Mars flood, occurring around 3.4 to 3.6 billion years ago.

On the structures found in Mars’ Valles Marineris, are some faint lines. These lines appear to be forming shapes, along with connecting to other ‘shapes’ nearby. Are they natural, or signs of a previous civilisation, living on Mars?

The Valles Marineris area was named after the Mariner 9, in 1971 – 1972, when the space probe first discovered this region. It is a system of canyons, stretching across the Tharsis region.

Valles Marineris is located along Mars’ equator, east from the Tharsis Bulge, and it stretches around almost a quarter of the circumference of the planet.

Recently, it has been theorised that Valles Marineris is a large tectonic crack in Mars’ crust. The majority of these researchers agree that it began forming as the crust thickened in that area, subsequently allowing it to widen through erosion.

Near the Eastern flanks of the rift are channels that may have been created by allowing water and or carbon dioxide to pass through.

Another theory is that Valles Marineris is a large channel formed by lava, eroding it into its current state.

If there are structures on Mars, that would also mean that at one point there was life on Mars. Scientists have confirmed that there was water on Mars and recently have begun looking for micro-organisms as well. They have taken pictures and seen that other examples of structures and past possible civilisations on Mars, such as strangely perfectly sculpted rocks on Mars, and photos of what appear to be aliens, captured by Mars Rovers.

What appears to be elongated and rectangular structures found in Mars’ ‘dirt’, along with some kind of small operations between these structures.

This whole area appears to be some kind of ancient civilisation in ruins, as it is filled with irregular shapes and lines which are either covered by or sticking out of the mud and dirt. What are the odds of a collective of strange shapes naturally occurring? The probability of all of these odd ‘structures’ is minuscule.

When you zoom in on a particular area, you can see a semi-circle, connected to, what appears to be part of a larger octagon with two lines. It sort of resembles a bridge in ruins, wiped out onto its side by the great flood. Although it could also be a coincidence, it does not seem likely, as there are similar shapes, in close proximity to the one described earlier.

More recent evidence that supports life on Mars, and previous civilisations that have been there. Recently NASA discovered circular formations on the sides of rocks while using high-resolution imagery from the Mars Curiosity Rover.

Martian Fungus? It seems to be, or something similar, as it possesses all of the same quality as fungus from Earth possesses. The colour, shape and size all point to fungus.

If this is true, it indicates that Mars is able to support life, meaning that buildings in ruins would be possible, as there may have been a past civilisation of Martians inhabiting Valles Marineris.

So are these shapes ancient structures in ruins? It is impossible to say for sure, but more updates on space news will be posted regularly.

By MARS ANOMALIES and BEYOND